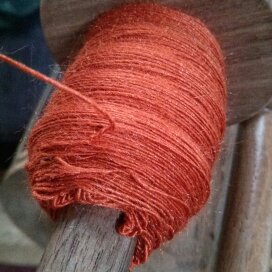 Since I learned how to spin, I haven’t stopped. I have a good quantity (also known as stash) of roving and top prepared to be spun, and another good quantity of spun yarn rolled into balls. Because I hand-spin, there is never enough of one type or one color to make something traditional like a sweater, and there isn’t enough of all of it to produce something predictable like a blanket. So I am holding on to wool in its potential form, rolled up in pretty balls, kept in moth-safe houses, for… something. I am asked what I will do with my wool often, because one doesn’t just collect wool. It is a too useful a material not to use it, not to make an end product, not to enter the stable stage of wool called sweater or blanket. But why not? Why is the liminal stage of wool so unsettling?

“Wool” is a noun that describes a type of protein-based fiber produced inside the skin of several types of mammals, that grows on the outside of the skin to varying lengths, and that is then collected by humans for varying purposes. Because it is removed from its original source, wool becomes a liminal state. Wool may be a noun, but the material it denotes is pure potential.

Think about the sheep grazing together on a pasture. It’s a tranquil scene, these is birdsong, there are flowers and bees, and tiny cottages in the background. That is the original state of wool, a state called sheep (or whatever other animal you prefer – although it can also be called sheep-skin once the sheep dies). When the sheep are sheared, the wool enters its liminal stage, where it is tormented and teased into roving, top, and yarn. It is scoured, combed, carded, rolled, dyed, spun, plyed, wound, and sold, in every condition in between.

Wool is one of the oldest resources known to man-kind, mostly meant to serve the same purpose it served in its original form: to keep its bearer warm. It goes through such intense processing to become usable (even sheep-skins need to be tanned to be fashioned into garments) that anyone would feel remiss not to manipulate the yarn into a wearable form, into its useful form. Because wool cannot just exist in and of itself in the human world. Wool is not a finished product.

However, the idea of a sheep being presented with a ball of yarn made from the hair it lost the year before, seems worthy of contemplation.

Or the idea of a serial shearer that collects little bunches of hair from his/her victims, that s/he then manipulates into some wearable item sounds not too estranged from the description of your average knitter. And mind you, knitters are known to be avid collectors of shearables.

So then it shouldn’t seem odd that I procure wool roving and top to spin it into this highly potentive state called yarn. It shouldn’t be strange that I build boxes to store this potential as I create more. Because, somehow, the ever-changing flux of potential is a lot more attractive than the stagnant image of a blanket or a sweater. It’s the liminality…