Building a house is simple. Walls, a roof and floor – wheels, in my case. Etymologically, “building”  specifically refers to erecting a house, and now the word is also a noun that essentially means shelter.  Building is a human need, both as a verb and as a noun; it’s been practiced and perfected over millennia to prove it, yet shelter is not the extent of human need in terms of habitat. We need comfort and security, as well as a sense of belonging, because without it we feel adrift.

So what does it mean to build a house and make a home inside it? Almost everyone hires a builder or contractor to build their house, so it’s not the building process that creates attachment to structure and space. I built my own house, and then seriously contemplated selling the shell (a very appropriate term), and moving again. It’s actually the process of habitation that creates attachment, a process also known as home-making; it is identifying immediate needs and making, gathering, or re-purposing objects to meet those needs. With every need met, there is emotion woven into the fabric of the home, yet another memory safely entrenched in the nooks of a space that becomes more sacred with each passing day. This space slowly takes on an aura of mother and protector, as it feeds and shelters its inhabitant. It becomes the gravitational center of one’s life, a space that one always goes back to no matter how far away one strays.

So far, this theory has proven accurate for me. For a year now, I’ve been finding needs and meeting them through hands-on making, and learning in the process that homemade objects are not necessarily the best option, but they do teach me to sharpen the details with which my needs present themselves. Why do I need a yellow armchair? Because it’s my favorite color, and it will brighten the dark area under my loft, as much as it will provide a comfy spot by the fire to do with as I see fit at the time. I encounter this problem quite a bit in my tiny house: I have only so much space, how should I configure it? The answer so far has been not to; why not keep the potential in a non-configured space? Do I need just one form? Or multiple forms? And which one takes priority? And this is how my house is not so tiny anymore as it maintains the capacity to change. 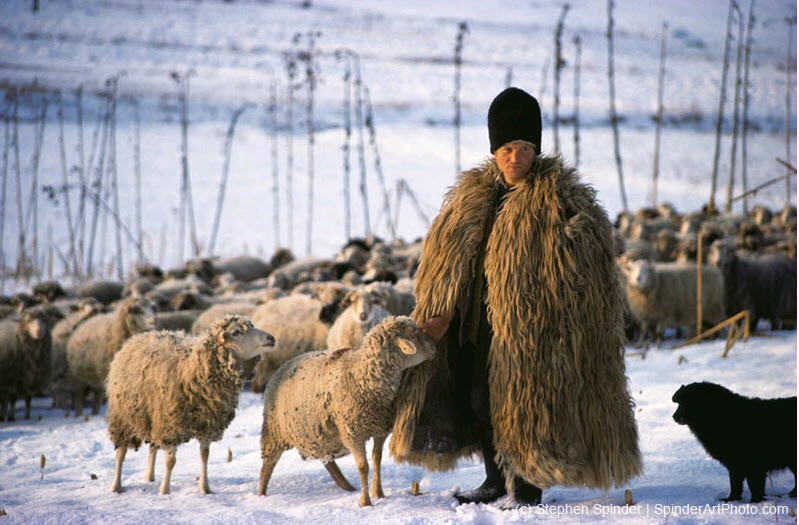 This entire process brought about my interest in weaving and wool, but not as craft and material, as much as concept and potential. For me, weaving is not about making fabric; it’s about the process of entangling/fastening/making to create inhabitable spaces; and wool is not so much the protein based fiber as it is the quintessential symbol for warmth and comfort. It is an idea that brings back memories of Romanian shepherds wearing shaggy long cloaks made from Romanian sheepskins. I recently asked, What kind of breed is that? Tzurcana. A meat and milk breed that grows coarse wool, nearly a foot long. Those cloaks were both clothing and sleeping bags for those ancient shepherds, who had to move their sheep seasonally, and roam with them as they grazed. The process, also known as transhumance, was revered and exalted in the folk literature I studied as a child in Romania. But then again, back then the peasant in general was an icon to be revered, a leftover idea from the regime days, dark days I was blissfully spared.