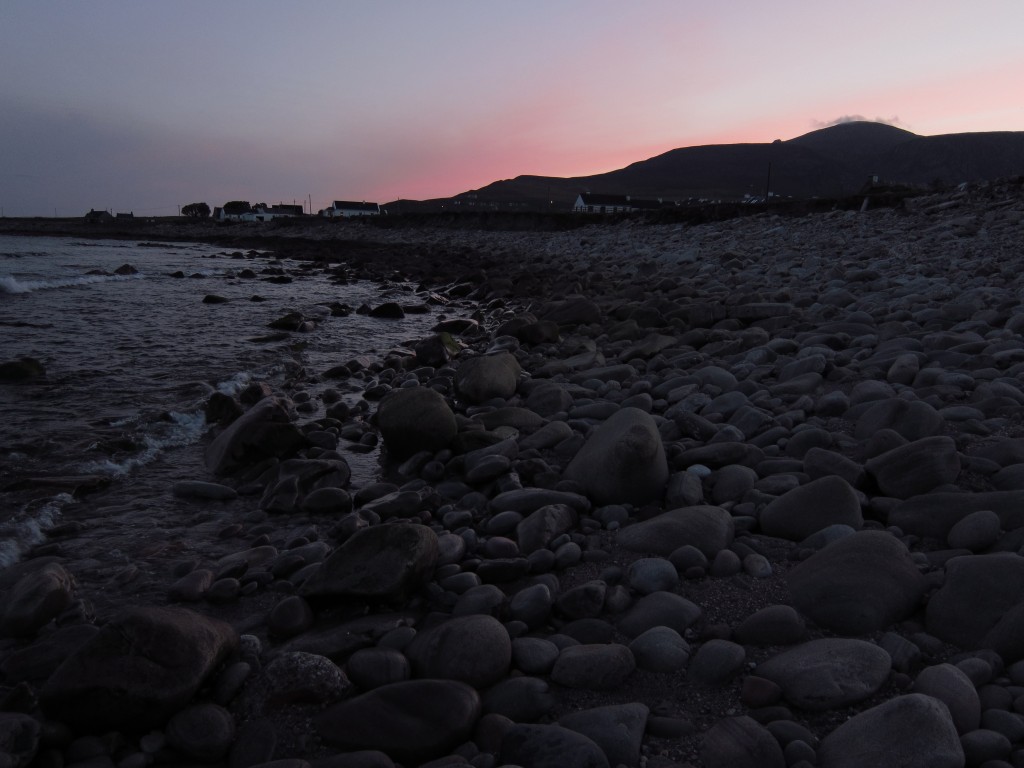 Gielty’s pub is the only public eatery in Dooagh, Achill Island, and as such functions as meeting place, cafe and bar, auditorium and conference center, for the whole village. It’s fairly central on the main road and happens to be also painted in a visible color just in case… The Gielty family must be fond of food since the only grocery store in the village is also called by that name, but that’s beside the point.

For two nights now, a group of elderly tourists have been gathering in the front room of the pub to have collective sing-alongs with their tea and Guinness, and to tell stories of their travels and of their youth. They sit at two tables by the corner bench, and whip out their iPads when they forget the lyrics to their songs. In between singing, they take digital pictures of each other and group snaps to record the evening’s happenings, which can get quite exciting, especially when the bartender decides to join in.In the style of the traditional movie bar scene, around midnight one night, after he had put the glasses away and wiped the counters and tables clean, the bartender reached for a guitar and walked around the counter to join the group of revelers. He sat down while the others welcomed him vociferously and dragged stools to make room among their ranks. He tuned his guitar and smiled, then he introduced his song and started strumming. His voice emerged out of his body full and vibrant, filling the room with thick sounds the color of rust, singing of sailors and shipwrecks, of men who risked their lives to save others’ from drowning, of men who died in a storm, swallowed by the waves. Their names were incanted at the end of the song like a prayer, enveloped by slow strumming, the bard had finished his story.

The images of his song filled my mind with dark, salty, desperate cries, the immensity of the sea, the cracking of timber, a local heartbreak. This community opened up its heart and shared sadness with me, a stranger, and I felt compelled to respond by finding songs about the sea to share with the community, to participate and be part of it, and express gratitude. I did not have the chance to share that night, but I did on the inside.

With heavy lids and a slight buzz from the overload of gaiety around the table, I emerged from the bar into the cool breeze coming from the bay, from the hum of voices multiplied by the great acoustics of the room, and the warmth – both physical and emotional – that permeated the atmosphere, into the suspended silence of the village past midnight. The waves drew lines into the silence with gentle regularity, the breeze punctuated with whispered whistles heading towards the mountain, where the outline of the peak was surrounded with a pale blue tone clinging to it, refusing to give way to the night.