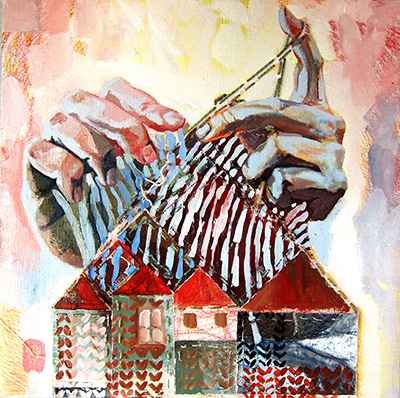 Creative Placemaking was coined by Ann Markusen and Anne Gadwa in a 2010 report by that name for the National Endowment for the Arts.

A quick google search turns up an accessible definition:

Creative Placemaking is an evolving field of practice that intentionally leverages the power of the arts, culture, and creativity to serve a community’s interest while driving a broader agenda for change, growth and transformation in a way that also builds character and quality of place.

Further inquiry into the matter yields a series of blogs about creative placemaking projects around the world, and books or articles written by the sharpest minds on the subject (which is only a decade old). An example is presented to illustrate the concept: a mural under a bridge that paved the way to the revitalization of a decaying neighborhood in New York City. Creative placemaking refers to the use of public art processes, in the context of multiple levels of community involvement, to enhance the quality of everyone’s life in degraded urban spaces.

I think the words carry deep understanding into a complex creative process born from community into visual form, while the definition focuses on the functional aspect of the practice as it concerns politics and money.

According to the definition, this process starts with the assumption that the (established) urban community in question appreciates the value of public art, that there are public funds available, a political willpower to appropriate the funds for art projects, and enough public support for creative upgrades at the very least.

Creative placemaking is here penciled as a practice meant to revive public spaces by making them attractive for human dwelling, but as far as I can tell from its definition, the human element is taken for granted. The shift from placemaking as community building, to placemaking as mural-painting, is problematic because community building is where the real work happens, while the mural is just a physical manifestation of placemaking.

“The essence of building is letting-dwell”  Heidegger

Before space becomes place, there must be dwelling. Before a bit of nature gets a name, people have to create a relationship with it. That couldn’t be more obvious to me as when I drive past hundreds of acres of grassy meadows dotted with houses, fragrant and whispering in the heat of summer, cradled between the dark woods that climb into the mountains. Each parcel has boundaries, an address, and papers of ownership. There is so much seemingly empty space here in North Idaho, untouched yet inaccessible. Room as far as the eye can see, but not enough room for the many who have none.

A place is created by building a relationship between body and space, literally by building a structure as an interface for dwelling. As I have mentioned before, we can’t access/inhabit space directly, so we create objects that enable us to establish a relationship with space, objects as simple as a table, and as complex as the internet. I like the metaphor of THING: old Norse for gathering, extended to a gathering of materials fastened together into an object, aka thing. We build to dwell, to inhabit, to consume, to transform SPACE into PLACE. As the other meaning of DWELLING suggests, object-making is necessary but not sufficient. If you have a favorite chair, or you prefer different cups for different beverages, you understand why relationships are established over time, while rituals are created by repetition, giving life to restrictions that define the edges of PLACE. Here, I can rename PLACE as HOME.

I define DWELLING as building intimate, object based relationships with space, over time, for the purpose of creating place in its stead. Once this intimate relationship is established, we typically turn to external relationships with other people and other places, which adds an external layer to personal dwelling, completing the process. This is the kind of placemaking I discovered during the “Making Room” project, in the last 4 years.

In fact, the conclusions that arose from “Making Room” centered around community building. It turns out that community is a basic requirement to establishing a sense of home (a place that is safe and comfortable at the very least). For sustainable dwelling to occur, people must come together in a cohesive community, if only because we are social creatures; solitary existence is stressful.

It’s bureaucratic to think that communities are defined by geography, like a town or neighborhood. That is one of the least important defining traits. Dwelling community is defined by the interpersonal relationships built around common dwelling practices. When you watch people on TV talk about their community in the wake of a disaster, the term is often politically charged, but when they talk about positive changes that came from within the community, representatives are referring to the dwelling community, that might exclude some neighbors if their dwelling practices differ.

While geographic space is not the strongest defining trait, community is closely intertwined with place, which is not necessarily physical or contiguous. Think about online communities created around common interests that can be established in the absence of physical geography. Or immigrant communities built around the need for support among strangers. One example is Sandpoint, Idaho, a small town full of immigrants (or transplants – as they call themselves), people who came from away, near, far, and everywhere in between. The Sandpoint transplant community is welcoming to the newcomer because they know what it’s like to be one; they often don’t live near each other.

“The proper dwelling plight lies in this, that mortals ever search anew for the essence of dwelling, that they must ever learn to dwell… Rightly considered and kept well in mind, it is the sole summons that calls mortals into their dwelling.

But how else can mortals answer this summons than by trying on their part, on their own, to bring dwelling to the fullness of its essence? This they accomplish when they build out of dwelling, and think of the sake of dwelling.”